Billie Eilish comes to Gila River Arena on Saturday 2nd April 2022 as part of her upcoming “Happier Than Ever” World Tour. The tour celebrates her latest album release, happier than ever, in 2021. It was a massive hit, and finally, Eilish is embarking on a tour to bring it to live stages across the U.S. The Grammy-winning artist started her tour in February and has made her way through several notable destinations across North America. She is also scheduled to play in Europe later this year. All Billie Eilish fans highly anticipate the tour and the pop sensation would expect sold-out shows throughout the tour. Get your tickets right now if you want to see her live at the Gila River Arena on 2nd April. 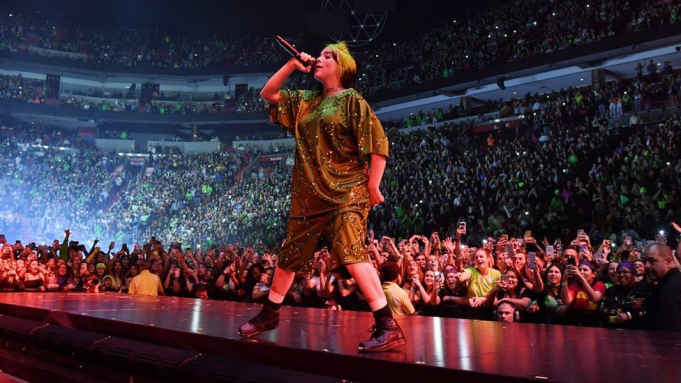 Billie Eilish rose to fame with her 2015 single, Ocean Eyes. Her brother, Finneas O’Connell, wrote and produced the song, with whom she is currently collaborating on her latest album as well. Her debut EP, Don’t Smile At Me, was released in 2017 and was an instant commercial success. It featured in the top 15 charts in the U.S, U.K, Canada and Australia. In 2019 she released her debut studio album When We Fall Asleep, Where do We Go? The album debuted at top 200 on Billboard and peaked at number one in the U.K. It became one of the best-selling albums of 2019, and her single, Bad Guy, became Eilish’s first number one.
Eilish has become a worldwide sensation and she has won several awards, including seven Grammy Awards, two AMAs, a Guinness World Record and a Golden Globe Award for Best Original Song. She is one of the most successful artists of the current era and the youngest to win a Grammy in four general categories – Best New Artist, Song of the Year, Album of the Year and Record of the Year.
Eilish is a wonderful live performer with a beautiful, deep voice and heartbreaking lyrics. Her music embodies the true passion of singing from the heart. Catch the global superstar live by getting your tickets right now before they are all sold out!