Opened to the public on December 26, 2003, Gila River Arena was originally known as Glendale Arena and formerly Jobing.com Arena, before becoming what it is today. Home of the Arizona Coyotes of the NHL, the arena is part of the 223-acre, $1 billion development Westgate Entertainment District – a sports and entertainment complex in Glendale, Arizona. 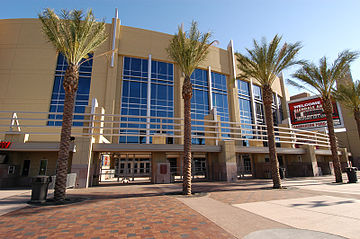 In 2014, the Arizona Coyotes entered into a naming rights and sponsorship deal with Gila River Casinos – a group of tribal casinos controlled by the Gila River Indian Community – that is set to last nine years, and makes the Gila River community the first federally recognized Native American tribe to hold a naming rights deal with a venue for one of the major North American professional sports leagues.

August 2016 saw the first ever event at Gila River Arena to be broadcast across the country on ESPN, when the venue officially hosted ArenaBowl XXIX, featuring the Philadelphia Soul and the Arizona Rattlers in front of an attendance of 13,390 fans.