Denver-based American folk-rock band The Lumineers recently revealed the dates for their Brightside 2022 World Tour alongside Gregory Alan Isakov and Daniel Rodgriguez. The Lumineers, Gregory Alan Isakov & Daniel Rodriguez, come to Gila River Arena on Tuesday 26th July 2022. The trek begins in May from Jacksonville’s Daily Palace and includes performances at notable destinations including Chicago, Dallas, New York and Los Angeles. Special guests on tour include Gregory Alan Isakov, Daniel Rodriguez, Caamp and James Bay. This is expected to be one of the most memorable tours of the year 2022 and if you’re looking to be a part of it, you will need to hurry and grab your tickets ASAP! 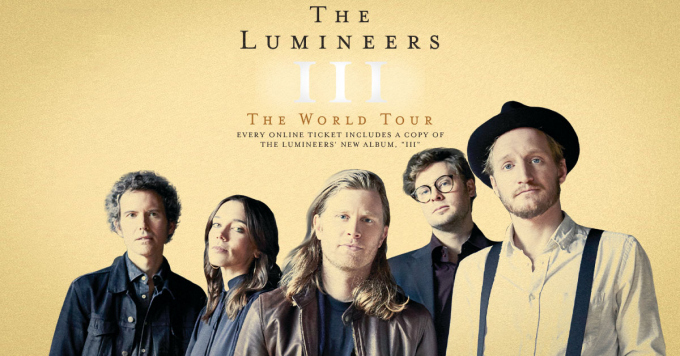 The Lumineers is one of the most famous American folk-rock bands. They have released four albums, with their debut self-titled album coming out in 2012. It peaked at number two on the U.S Billboard 200 and became a massive commercial hit. It received triple platinum certification in U.S and Canada and platinum in the U.K. Their second album, Cleopatra, was once again a superhit album and debuted at number one on the Billboard 200. The upcoming tour supports their latest album, Brightside, which came out earlier this year.
The Lumineers interestingly ban mobile phones on all their concerts, retaining the intimate feeling of people just following the music and nothing else. They provide people with a locking pouch to safely hold their phones so they can enjoy their evening to the fullest, without distractions. They are renowned for creating a fantastic atmosphere on their live shows, radiating a lot of positive energy. Over the years, they have released and performed several hit singles, including Stubborn Love, Ho Hey, Ophelia, Cleopatra and Angela.
The Lumineers are bringing along two top-rated artists; Isakov and Rodriguez. Isakov will be performing some of the hits such as Big Black Car, Words, San Luis and more. His 2020 album, Evening Machines, received a nomination for Best Folk Album at the 2020 Grammies. Be a part of this incredible experience by getting your tickets right now!